I've done everything I could to remain civil throughout the last four years.

I watched Democratic swamp creatures drag Justice Kavanaugh's name through the mud, creating a scandal out of absolutely nothing.

I quietly observed as they prosecuted General Michael Flynn, a true American patriot doing everything in his power to save the American way of life from the corrupt Obama administration.

I bit my tongue as Queen Pelosi & Pencil-Neck Schiff impeached our President on allegations that they were guilty of.

But this is too much.

They will NOT steal this election.

They will NOT take away my right to bear arms.

They will NOT undermine our Democracy and slowly begin transitioning to a communist country.

This is the truth of what's happening right now.

You can choose to open your eyes and see what's happening, or succumb to the mob of the radical left and watch as we fight the war for America.

Make no mistake, we are in a third world war - but it is not fought with bombs, guns, or grenades - it is fought with information. Buckle up.

Michigan Submitted Over 138k Fraudulent Ballots - All for Biden

This comes as no surprise seeing as Michigan is lead by Democrat Gretchen Whitmer.

Her grab for power under the guise of COVID lockdown was so intense that the SCOTUS of her state denied further lockdown restrictions, which included 6 months of jailtime for businesses that did not contact trace & report that contact tracing to the state.

But I digress; after the ballot counting was paused, which in itself is unprecedented and a massive red flag, 138,339 votes were counted in the wee hours of the morning.

Of those ballots, 0% were for Trump.

You read that right - miraculously, the Democrat establishment of that state "found" 138,339 ballots that were exclusively for Biden.

This was a state that Trump was leading in massively, and for these magic ballots to appear out of nowhere is irrefutable proof that the results in Michigan are absolutely false.

WATCH THIS NOW. Share this far and wide! VOTER FRAUD is REAL and is HAPPENING. #votingfraud #fraud #Election2020 @realDonaldTrump pic.twitter.com/fqaJk0vUCc

In Arizona, thousands of Trump voters were identified & given Sharpies to fill out their ballot.

Why does this matter?

If a vote is filled out in Sharpie, it can not be read by the voting machine, and therefore not counted.

This would explain why Arizona turned blue even though it was projected to be a clear win for Trump.

By 8 pm PST, Florida was a clear win for Trump, as was Texas and Ohio. He was leading by double digits as the counting came to an end.

And yet, the media refused to announce victory. This would be fine if they applied the same mindset to potentially blue states.

Of course they didn't.

Fox, CNN, MSNBC, and all of the other mainstream conglomerates did not hesitate to call that Biden had won California when less than 0% of the votes were counted, or call Arizona when only 45% of the votes had been counted.

Joe Biden has been called the winner of California with 0% in. pic.twitter.com/dOA6s57yRE

Why is this important?

Voters who are still in line when these results are released become discouraged and tend to leave.

This has a direct impact on Trump votes, and as this election has shown, a few thousand votes could make or break an election.

Explain this to me:

How did Florida, a state that had over 11 million votes to count, release their results by 8 pm PST, while the final swing states of Nevada, Wisconsin, Pennsylvania, and Michigan, are still counting votes right now?

These states have less than half of the votes to count than Florida, yet still can't get their election system together over 24 hours later.

Why is this important?

Knowing their impact on the election, these states waited to see the real results, paused counting, then submitted as many fake ballots as they needed to ensure a Biden victory.

This is voter fraud, election interference, election meddling, and treason.

Aggressive leftists in Philadelphia prevented a certified poll watcher from entering their poll, effectively blocking him from doing his duty.

What were they doing inside that they don't want the American people to see?

More importantly, how many more of these cases are there that went undocumented?

In Virginia, pictures have emerged of poll workers miraculously emerging with boxes full of ballots from drop boxes late at night.... Only to be counted in the morning.

1. Why these ballots couldn't be counted right there

2. Why these ballots weren't already at the polling center

3. Why these boxes of ballots miraculously appear while Trump is in the lead

To top it off, there was a poll worker locked in that same room overnight.

Once the counting began again, like magic, Biden took the lead and won the electoral votes. 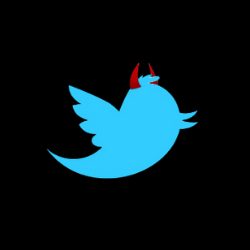 Shortly after Biden made an announcement saying he felt good about winning, President Trump released a tweet saying something similar.

Biden's video was left up, while President Trump's tweet was censored. Here's a screenshot below: 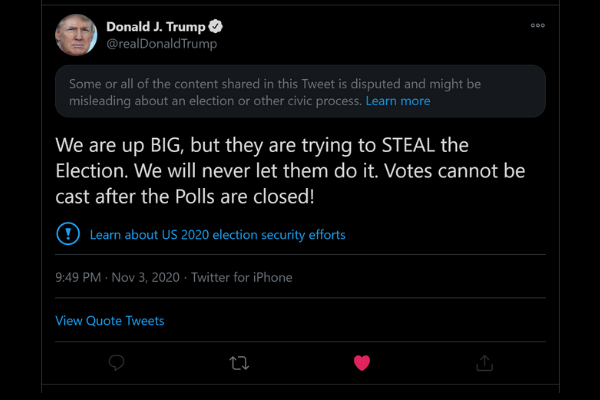 But that's not all; as of writing this on November 4th at 6:00 pm PST Twitter has censored or flagged six of the President's Tweets.

Some of them weren't able to be retweeted, liked, or replied to, effectively throttling his communication with the American people in the middle of an election.

The amount of Joe's tweets censored or flagged? ZERO.

To fight big tech and educate the American people, here are screenshots of all of the tweets uncensored for you to read. 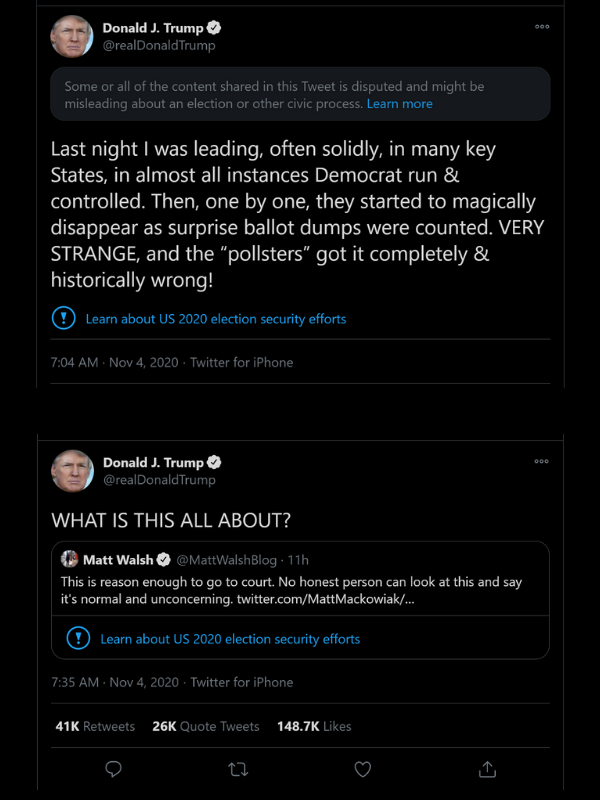 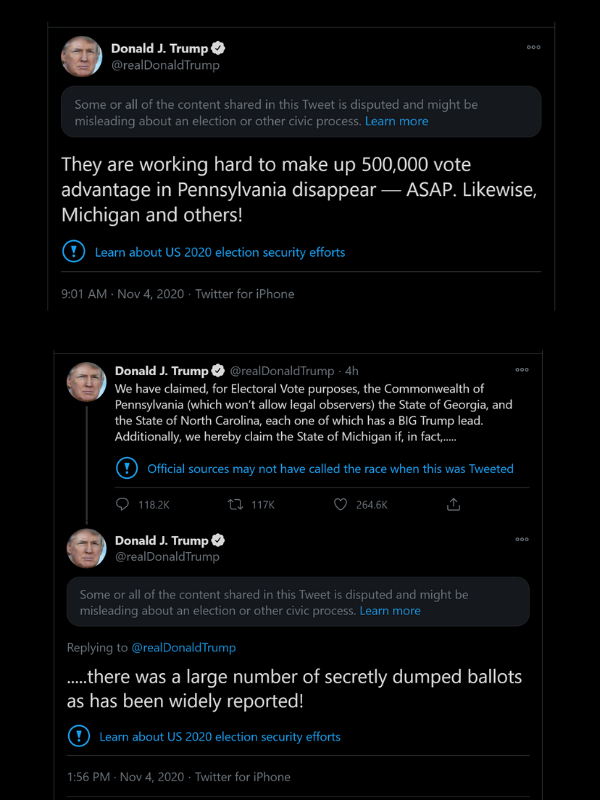 This Is All Good News 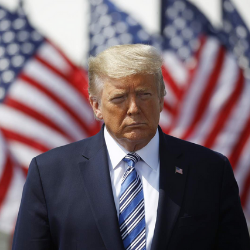 You read that right; this is all great news for us.

All of these desperate attempts to steal an election are signs that the enemy is scared.

The Deep State knows their reign of terror is coming to an end, and they are resorting to sloppy, last-ditch attempts to steal the election.

To all you Obamas, Bidens, Clintons, Schiffs, and Podestas out there:

Your time is up. Enjoy your time out of federal prison while you can.

To my fellow patriots:

Hold the line. Keep the faith. Sleep well tonight knowing that justice will be served.

POTUS will be able to identify these fraudulent ballots, reclaim presidency, and we will again defeat communism and return to our American way of life.